Everything is an Illusion We are on an endless search for something.

Our life should be easy but it becomes increasingly more complicated. We are free but we succumb to various trends which ironically make up our identity. We say that we know ourselves, but we base this opinion on what other people say about us. We are God’s temple, but we cannot stop hurting not only others but also ourselves.
$ 16.00
Buy this book

Everything is an Illusion

Imagine life without doubts. Wouldn’t it be beautiful?


However, doubts are the inseparable part of our existence. It’s difficult to fight them, because this would make sense only if we reached the source thereof and this means going deep down and confronting our pain. 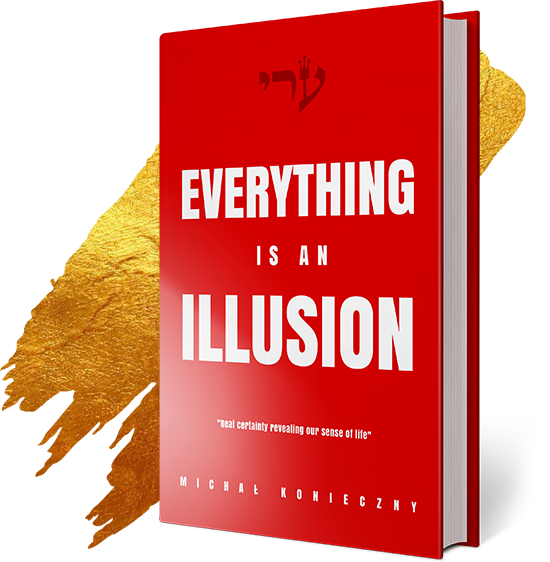 If only we became a proper vessel for reception, if we corrected our sense of perception, became more responsible, we could have everything,  but first we need to know how to achieve it.

And now, if in a prayer or meditation you could ask the Intelligent energy for any sum of money, how much money would be enough for you? Would you be happy with three hundred thousand, one million or maybe seven million? I presume that at first we wouldn’t ask for more than that.

When we ask for more than we need, we start feeling uncertain as if we didn’t deserve more and unfortunately, we rely on what our senses project. And what happens then? We unnecessarily become the slaves of our desires, whose role we don’t understand, and put limits on ourselves we don’t actually need.

Is that what human humility is about? Surely, we are the creators of our limitations, and behind them there are our feelings of doubt, shame, guilt or grief, i.e. uncomfortable states we always try to escape. For this reason, we ask for less than we would actually wish for if only we were honest with ourselves.

What if I told you that your destiny was a fortune, a yacht, an amazing relationship and a private jet. Namely, a life which you daren’t even dream of. The Intelligent energy doesn’t know the feeling of shame, grief, guilt or lust. It doesn’t feel uncertainty or lowered self-esteem. But those are the signals we most often emit.

What hides behind fake humility and apparent modesty, which distinguish the ego, are doubts, fear and lack of self-esteem.

The consciousness of every human might be divided into two main categories as far as the roles they assume in the face of life experience are concerned:

The first category comprises victims and the second egomaniacs. The following features are typical of a victim:


When we assume the role of a victim, it’s a sign that our mechanism of perceiving reality has been disordered. One of the patterns of behavior we observe in a victim is limiting her/his desires by imposing on herself/ himself some kind of renunciation, often unconsciously, which she/he then tries to elicit from others, thereby establishing her/his control.

A victim doesn’t solve her financial problems for the very reason that she doesn’t feel responsible for them. Therefore, she will be complaining about having insufficient money and about other external factors such as the government, the president, her employer, the richer who, in her opinion, would be responsible for her misfortune.

We can observe, such a pattern in business. If its activity is built on the basis of ethics and morality, which stand for the victim standards, as morality and ethics represent a hidden part of the ego and have nothing to do with spiritual development. This business won’t be authentic and actually won’t have the right to exist. We may expect it would soon collapse. Even if we manage to maintain it, it will face the same problems or challenges as in the past, which, with a wrong approach, will destroy it, because this is how the laws of nature work. The problems might naturally come in a different package, new people, scenarios, but that’s about the only thing that will be different. The essence of the problem would be the same though.

The extreme opposite of a victim is an egomaniac, distinguished by:


Egomaniacs are people who like earning money, strive for success, fame or affluence and nothing and nobody can stop them on this path. They often transform these pursuits into their life passion and purpose, without which their lives become empty and pointless. They don’t waste their time on complaining and thinking about what’s happening in other fields of their life which aren’t of their interest. They are focused on themselves and on success.

Contrary to a victim the actions of an egomaniac resemble sharing; self-work, exercise, fighting with addictions, charity or supporting good causes.

It is still, though, the energy of self-gratification. However, as opposed to victims, the frequency of vibrations of egomaniacs is less harmful, as part of their consciousness constitutes responsibility for their actions.
Their actions often generate the energy of compassion, empathy, truthfulness, courage, acceptance, pride and megalomania. Egomaniacs will go to great lengths as far as sharing is concerned in order to succeed or achieve fulfillment.

The difference between the consciousness of a victim and an egomaniac is fundamental then. The victim DOESN’T WANT TO CHANGE AND DOESN’T DO THAT! On the other hand, the egomaniac constantly engages in self-work. He may suffer some renunciation which his goal presupposes. He knows that the road leading to his goal often connects with pain and that there is no chance of avoiding difficult challenges.

This differentiation can be met in every field of our lives, including in our interests, politics, relations with children or a spouse. The key to success is to create conscious balance between these two forces, thanks to which we become more authentic. By doing so, WE WILL TRANSFORM OUR DOUBTS AND REGAIN TRUE CONTROL!

That’s why it’s extremely important to know who our employees, customers or the recipients of our products or offer are. Naturally different things will appeal to victims than to egomaniacs.

Who would you like to do business with? With victims or egomaniacs?  Contrary to victims, egomaniacs understand that each success comes with some change. To the victims, whose perception of reality is rather strongly disordered, an egomaniac will appear as a wise guy, a cheater, a con or a manipulator.

What we should however try to realize and become aware of, is the fact that every single memory, desire, thought, emotion or action constitutes of these two opposing energies.

Let’s take as an example, the recent Presidential Election in the US. People with prevailing victim consciousness voted for that candidate, who would implement more restrictions and rules in social and business domains. The favorite part of such consciousness is to vote for the candidate, that expresses fake humility and apparent modesty, while expressing over-concern for voters’ current circumstances. The candidate knows that awakening a sense of pride and dignity for doing the right thing for community and society is the key to win the election.

On the other hand, people with egomaniac consciousness, voted for the candidate that would focus on economic interests, supporting preferences for national manufacturing, trade deficit or giving more social and businesslike freedom. Egomaniac are not afraid of changes and challenges. They actually welcome them, as they know that without it, desired goals wouldn’t be ever able to be manifested.

These two opposing consciousnesses create division and build separation between people, societies and countries. The same qualities of  consciousness we will find in any life program, such us: social, family, work business, spirituality, relationship, health, in the way we eat, play, travel, dress or express our point of view.

Let’s take a deeper dive into our consciousness, where a cause of our doubt is well protected by our ego. One consciousness may be totally  pure and honest, that manipulation or telling a lie for the sake of selling a merchandise is wrong and should never have taken place in any business. The same person’s business however, may at the same time go through serious financial challenges. Knowing that filing for bankruptcy is inevitable, the man takes a bank loan, which is never going to be paid off. You see, the consciousness of a victim and an egomaniac are closely interrelated. Therefore, the task of recognizing tens of thousands of memories, desires, and thoughts, that are intertwined from minute to minute, and being meticulously protected by our ego, is not an easy task.

Our main purpose as humanity is not to fight or eradicate one of these consciousnesses, as one without the other cannot exist. In our 5 senses world, the reality and PARADOX OF POLARITY always exists. When we have BOTH POLARITIES operating at the same time, then we have reality. WITHOUT THE OPPOSITES of VICTIM AND EGOMANIAC working together, we do not have true reality, instead we have ILLUSION. Our paramount task  is to make an effort to combine them together and unify. This can be done by transforming victim consciousness into egomaniac and egomaniac consciousness into victim. This process will create a new, unknown to us consciousness that will transform our doubts, uncertainties, and create protection from any life misfortune.

In the book “Everything is an illusion” Michael Keter elaborates and orchestrates spiritual tools, that allow the transformation of consciousness of victims and egomaniacs into one unified whole. Receive notifications concerning future events and news in terms of education materials.
By clicking the SUBSCRIBE button, you agree to send us your data. The website owner undertakes to use this data in accordance with its data protection principles, including to contact to present the offer. The administrator of personal data is Fundacja Modern Restrictionalistic Centre, Energetyczna 6/7, 53-330 Wrocław, NIP 8992834674. More in the privacy policy.